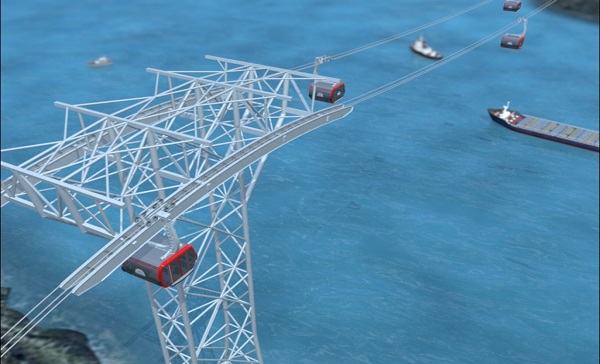 The Sh5.8 billion cable car project at the busy Likoni channel has moved closer to reality after the completion of a concession agreement.

Construction work will begin next year and will take two years, with commuters starting to enjoy the cable car services from 2020.

Trapos Limited, who are the sponsors of the project, and the Kenya Ferry Services signed the concession agreement of the Sh5.8billion project on Wednesday at the KFS mainland side offices.

“The project is on schedule with the official groundbreaking slated in early 2018. Construction is expected to take 18 months and once operational in December 2019, commuters will cross the 500-metre channel in about three minutes,” KFS communications officer Aaron Mutiso said in an earlier statement to newsrooms.

The project is funded and initiated under the Public-Private Partnership (PPP) Act, 2013, he said.

According to the design of the express link, it will have 22 cable cars that will be able to carry 38 passengers per cabin.

The express cable cars will have a capacity to transport more than 180,000 commuters per day.

The event comes a week after stakeholders of the Sh80 billion Mombasa Gate Bridge, linking the island to South Coast, revealed the project would be constructed in four years after completion of its ongoing feasibility study.

The Repcon Associates managing consultant also said that during consultations in the first stage of the study, it was agreed that the bridge will start on Lumumba Road, near Jela Baridi Prison, Majengo.

It will cross the railway station and Moi Avenue along Archbishop Makarios Road, cross the Likoni Channel at Mwenza Creek and then join the Southern By-pass at Ziwani through the Mtongwe road.